Rebounding from the level of 1,680 USD reached on July 21, gold was able to gain +7.5% as a part of the expected recovery. However, after reaching a peak of 1,808 USD, the summer rally ended. Since then, the price of gold has been under strong pressure again.

After the fall to the weekly low of 1,691 USD, reached on September 1, traders betting on a decline could not break through the historically important support in the area of 1,680 USD. Last year, this level sustained three times the attacks of the "bears", and six weeks ago it again caused a sharp upward counter-movement. Most likely, the fifth attack on this support level will lead to a breakdown. It should be suggested that this technical signal may cause another significant decline in gold prices.


The background for such a weak and disappointing situation for many fans of the precious metal is a lot of hard pressure factors that are unlikely to change in the near future. First of all, it is a sharp change in the monetary policy of the U.S. Federal Reserve, which, in conditions of high inflation with an increase in interest rates and a tightening of the money supply, has been seriously hitting financial markets for almost 10 months.

At the same time, the yield on 2-year U.S. Treasury bonds rose to 3.5%, the highest level since 2007, as investors expect the Fed to raise interest rates further. In addition, this led to an even greater strengthening of the U.S. dollar. For months, the strong dollar has been causing liquidity problems around the world because only the U.S. can print dollars. A strong greenback usually puts pressure on the price of gold, as well as on the value of almost all commodities.


In general, the forecast remains pessimistic. The bear market rally may intensify after the Fed's September meeting, at which a decision on the amount of rate hikes will be made. Despite the fact that September is usually a bullish market for gold due to seasonality, depending on a combination of factors, it may not work right now. The only thing that can keep gold from falling heavily is geopolitical issues. 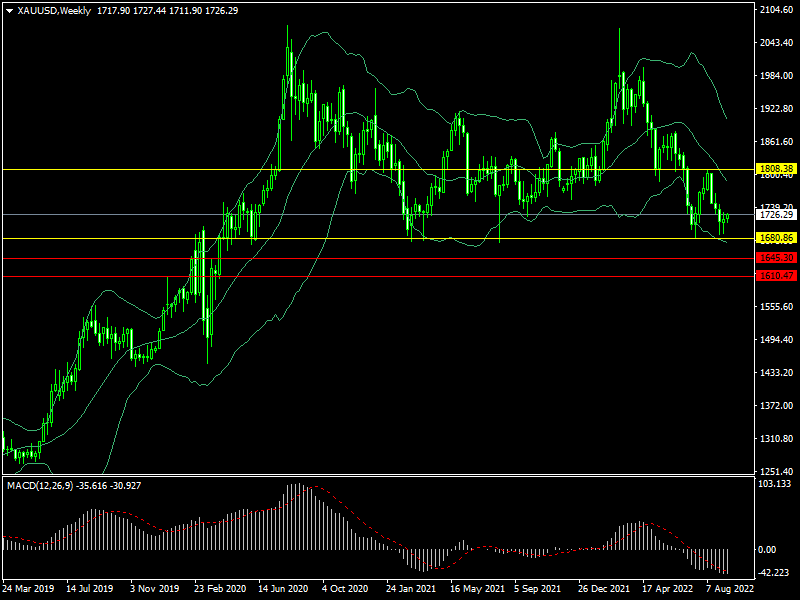 From the technical analysis point of view, the weekly chart shows that the price is below the middle line of the Bollinger indicator, while the MACD is in the oversold zone. Although the price is trading just above the important support level of 1,680 USD and the situation looks very oversold, there is a much higher possibility of a breakdown. This may happen before the end of 2022. In this case, important support levels will be 1,610 USD and 1,640 USD.

A similar situation is seen on the daily chart. Although there is a chance of a price correction towards 1.757 USD, followed by the formation of a sideways movement between 1.680 USD and 1.757 USD.


For intraday traders, important support and resistance levels may be used to open buy or sell positions. For positional traders, the upward movement may be considered as a correction to open positions for sale with targets at lower levels below 1.680 USD. However, if the gold price falls even lower than 1,640 USD or 1,610 USD, then this will be a great opportunity to buy. Sooner or later, the U.S. Fed will be forced to change its monetary policy due to the collapse of credit markets. It is quite possible that this process may be delayed until the spring of 2023.