The oil market has been under pressure since June 2022 after the Fed started raising rates from March 2022. The aggressive monetary policy of the U.S. central bank has led to a large-scale strengthening of the dollar and high volatility on the markets. Brent crude oil (XBRUSD) held above 100 USD per barrel for some time, but investors began to fear a looming recession, which could lead to a demand drop, and black gold started to fall.

According to economic data, manufacturing activity in developing countries began to decrease due to rising inflation, while hedge funds and other institutional traders were reducing their long positions for 10 of the last 16 weeks,  across the most traded oil contracts by a combined 237 million barrels. The only one reason that oil prices did not fall lower than 90 USD was continued fear of tight supply despite the coming recession.


On September 5 2022, OPEC+ decided to cut oil output by 100K barrels per day, which was the first cut since 2020, when the committee started to reduce production to fight dramatically falling oil prices. However, this September’s cut seemed insufficient to investors and oil fell to 82.37 USD after that. In addition, lockdowns due to the new wave of COVID in China has speeded up this decline.


On October 5, 2022, the member countries of the OPEC + committee agreed once again to gradually reduce production by a record 2 million barrels per day. This cut may boost the recovery of oil prices up to 100 USD - 110 USD by the end of year.  OPEC'S leader Saudi Arabia said that the reduction will equal 2% of global output and this step was needed to respond to the wide rising interest rates across the world's central banks and slowing global economy. Later, after the meeting, official of Saudi Arabia noted that the real output cut might be around 1.0 - 1.1 mln barrels per day, since the figure of 2 mln based on existing data, and OPEC already reduced production by 3.6 mln barrels per day in August, which means that some committee  member countries can not cut more than they do now.


On the same day, the EU approved another package of sanctions against Russia, and one of the points is the cap of oil prices. Analysts say that this step looks somewhat ridiculous and is unlikely to stop the recovery of oil quotes.


The D1 chart shows that the upper trendline of the descending channel has been broken upon the cut output OPEC+ decision, and the resistance level of 92 USD also. The next target resistance lines might be around 96 USD, 98 USD and 102 USD in coming months. The MACD indicator suggests the same price direction. However, the price is still under the 200 day moving average, which means that the recovery might not be faster as it seems. Finally, the prices may be seen around 107 USD and 115 USD if the cut output is performed in full. 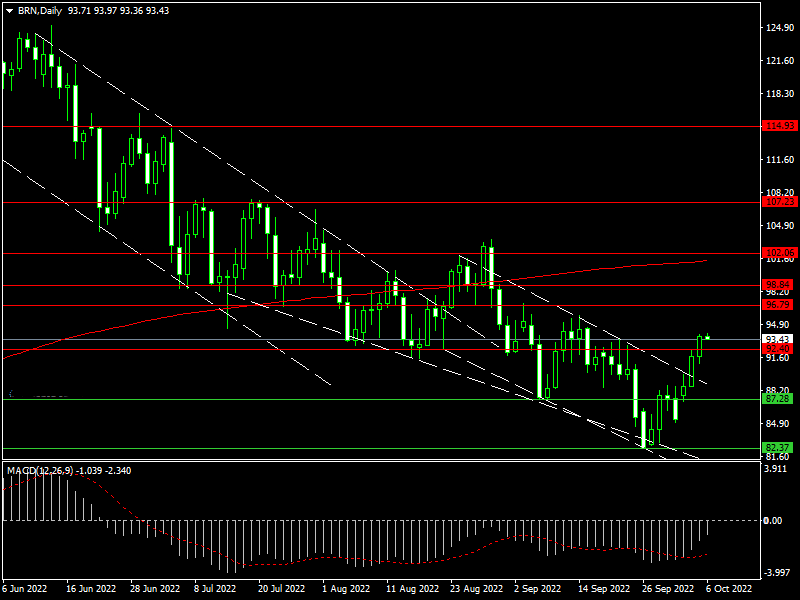 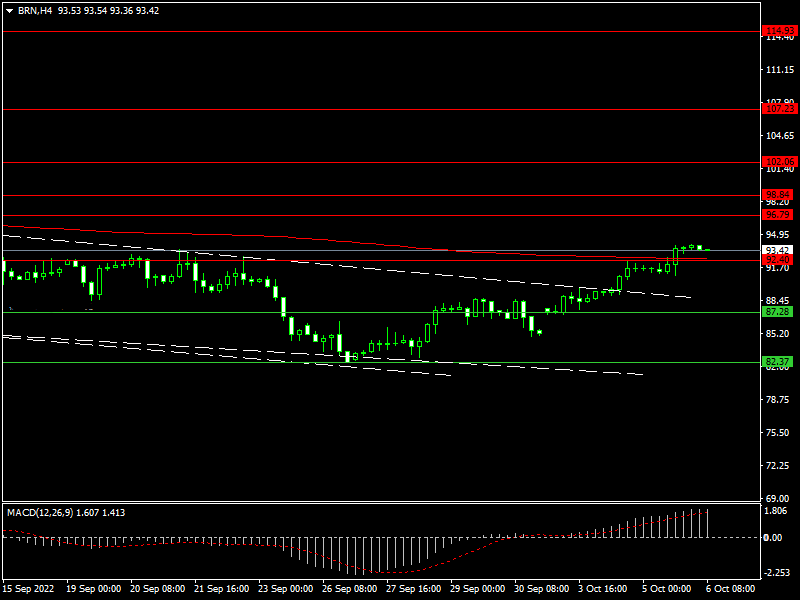 The H4 chart confirms the breakthrough of the important resistance level of 92.40 USD. The MACD indicator confirms the chance of continued upward movement. It’s possible that the correction downwards towards 92.40 USD may occur, in order to confirm the break of this level, before rising to the next targets at 96 USD, 98 USD and higher.