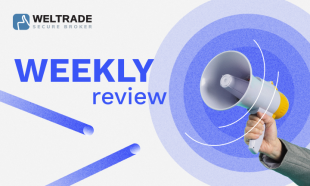 Markets Adjust Before Christmas and the Fed Meeting.

On Monday, gold declined to 1,745 USD amid strengthening dollar. One of the main vectors for market orientation remains the U.S. dollar index, which rebounded from the important support level of 105.521, which caused a corrective movement down the main currency pairs and gold is no exception. Investors are waiting for the Fed meeting in early December to hear Jerome Powell's comments on financial policy. The daily chart shows that the next target may be at 1,725 USD, an important historical resistance level. Key resistance levels remain at 1,755 USD, 1,761 USD and 1,770 USD.


In October, the annual inflation rate in the EU was 10.6%, which is slightly lower than preliminary estimates of 10.7%.  But, 75% of the components of the consumer price index are higher than 4%, which has never been in the history of the EU. In addition, due to the deepening and expansion of the recession, next year we may see an equally interesting situation with deflation.


The number of building permits issued in October as well as the start of construction of new homes in the U.S. continued to decline actively, which indicates the onset of a recession in the U.S. construction sector. This is cyclical and reflects people's confidence in future stability.  Americans are losing faith in a bright future, while inflation expectations are high, which spurs them to spend more: retail sales in October unexpectedly increased by 1.3% compared to September and this is clearly not like the Fed.


According to the Federal Reserve Bank of Philadelphia, the number of orders for the production of goods in November continues to decline and is already close to 2020 levels and signals the beginning of a recession in the u.s. industrial sector. Taking into account the correlation between the number of orders and earnings per share, it is sure to say that a large-scale decline in profits awaits American companies ahead, which is forgotten by bulls on the US stock market.


Bitcoin miners sell 135% of their stock. Meanwhile, the coin is trading around 16,700 USD. The market has been in a rest place for ten days after the recent collapse. The correlation of bitcoin with the S&P500 index has become negative and is 0.62. The crypto market has stopped responding to the dynamics of the dollar and stock indices. Investors are busy by transferring tokens from centralized exchanges to cold wallets to protect their cryptocurrency. In addition to the head of Tesla and Space, the President of El Salvador, Nayib Bukele, spoke in support of the first cryptocurrency. According to him, the failing FTX is the opposite of bitcoin. The fact that the FTX exchange unfairly handled the funds of its customers was noticed earlier by the head of Binance when he announced the refusal to purchase the problematic platform. Later it became known that at least 1 billion USD of FTX customer funds sent to Alameda disappeared.